For the event I created a small abstract painting for each selection – in fact, I did more than one painting per story. I am showing you all the images, day by day, throughout February. I’m also including a short write-up as to how I went about turning the authors’ words into pictorial representations.

I hope you’ll take a look at my art, then go to Fictive Dream, see which image editor Laura Black chose for the magazine, and read the story!

Thank you to Laura for her faith in my work and to the authors for such wonderful material to work with.

Interview in an Off-Licence by Sharon Boyle. Read it here at Fictive Dream.

Here are the artworks on their own: 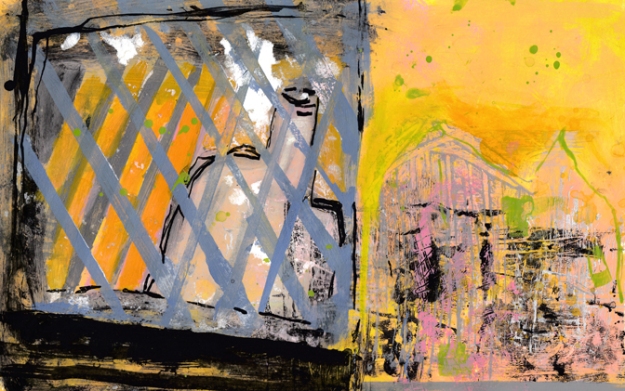 and here they are with the banner.

This story tells of an encounter between a woman recently released from prison and the male employee of a liquor store in what is referred to twice in the text as “this ashtray of a town”. The setting is grim, but it is in this place the woman faces a choice and takes the chance on rejoining the world rather than retreating from it.

Image 41 – I depicted a street in this “ashtray of a town” in grays and tans, with the grid of the bars mentioned in the text in one building, but I also gave it a door – the door she steps out of and then back into after she decides on the direction she wants to take in her life. I also portrayed the sky as warm and bright signifying how the woman feels a sense of hope and taking charge.

Image 42 – I used the same general color scheme as in Image 41 and divided the picture. On one set I set the wine behind bars as the interior of the store is described in the text; the woman has decided that she will not put herself behind bars or restrictions anymore. On the other side I depicted the town under a warm sky, signifying the woman’s intention to rejoin society and have hope for her future.

Read the story at Fictive Dream.