I did some illustrations for an event at Fictive Dream, an online fiction magazine specializing in short stories. It’s called “Revisits”. In it, the magazine revisits “the best of the back catalog”, as editor Laura Black says. Every two weeks through August, a different theme will be explored.

Look here for the first post, Love, which also offers an overview of the parameters of the art aspects of this project.

Today, July 24, the theme is Missing. Here’s the image:

As soon as I heard that this theme, Missing, would be part of Revisits, I knew how I would portray it using the tree theme and landscape design that Fictive Dream editor Laura Black and I had settled upon.

With this vision in mind, I read over Laura’s notes for the theme:

These stories are linked by sadness and/or despair so I’m thinking in terms of cool blues. For the tree, perhaps a single tree suggesting the loneliness of the person left behind.

I enthusiastically agreed with the color scheme. Blue conveyed the idea of a lack, a deficit, something that has been taken away – it’s a cold feeling, missing, a negative state, I felt.

But I strongly felt that a single tree might not convey enough of the theme. To me, one tree conveys the state of being left alone, being without; but how that state came about was not clear, I thought. I needed to show that things had once been fuller and were now lessened.

I set up a row of trees in a blue field under a gray sky, leaving a space where one tree should be but is not. I hoped that the gap would convey that once things had been complete but now they were not. I wanted the remaining trees to look drawn in, sad, and as if they were quite aware that one of them was missing from the line.

The idea behind my thinking was this – in any pattern, your eye looks for variation, and interprets it in light of the surrounding visual information. I’ve made lots of artwork with overt patterning that exploits this idea, such as these two collages below – but in the Missing artwork, the method was more subtle. 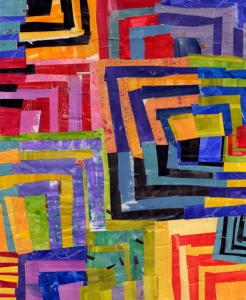 When I showed Laura the image, she liked it, and so – Missing was ready to be included.

Thanks for reading! And take a look at the stories:  here at Fictive Dream.