Here is the story of two friends who have never met, live 2700 miles apart on opposite coasts of the United States, and who nevertheless found a way to play a game of cards. Read on and find out the details.

In fall 2017, Sharon Mann asked me if I’d like to participate in another joint art project with her. I say,”another”, because we’ve done a couple of exchanges. In 2014, sculptures traveled across the country: 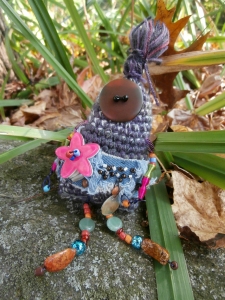 The Time Traveler who came to Wyncote, PA.

In 2016, we completed a project that had taken place over about 18 months – two artist books made from two discarded library books that we altered and added art and text. Our work was intermixed in each book, as we each did a few pages, exchanged the volumes through the mail, and continued the process until done – then we each had our own book to keep.

Now we have done another collaboration. It was Sharon’s (genius) idea – a deck of playing cards. I thought it was exciting, but ambitious. You know there are 52 cards in a deck, right? Then you see what I mean. Could I make 52 pieces of art that were different, interesting, appealing, and could also be put to use? (I did not have any doubt that Sharon could do this, by the way.) But I really wanted to do another project with her, and it did sound like a lot of fun…

So we worked out a plan. Parameters were:

A sample back that I made…

•We would do a few sets at a time, say, aces and fours and sevens. Finish them up, and then move on.

•Each of us would do half of each card and send it to the other, who would finish it and keep it. The person who started the card also did the back of that card.

•Enough rules, get to work!

In practical terms, it worked this way – I did a set of Aces, let’s say, halfway. Sent them to Sharon. She sent me her half-finished Aces, and I completed them. Aces done! We worked our way through the whole deck in a few months.

All right. As in our other projects, we approached our work from different directions and our styles are wildly different, and yet – there was always a harmony in the end result. I marveled at how that happened, again and again.

One thing we did differently – how we approached actually filling up the card.

My way of doing half a card was that I covered the whole card but set in half the elements, scattered over the surface. Sharon then added in her elements, again, all over the card.

She was very patient with me because sometimes, I got carried away and took up a lot of space, exceeding my 50%. I tried to make up for that on the next set of cards I sent her (leaving more room), but you know what, I really got inspired by the themes and colors of playing cards and forgot to stop. 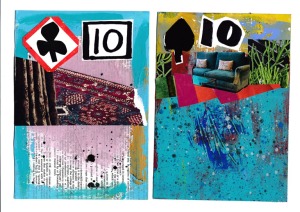 Sharon’s approach was different: she divided each card in half, totally finished her half, and left me an open space for my half. I created a whole new image on my half, and I didn’t worry about what was on the other half, just did what I felt. It was surprising how they coordinated and enhanced each other, I thought, every time I finished one.

I also enjoyed the fact that each of us adapted to how the other worked. In my case, it challenged me to do things in a way that I had not envisioned.

Now we are finished with this project. We each have a deck of 52: that’s 104 small pieces of art that we collaborated on. I think that is just astounding.

Even more meaningful, though, was the base upon which this project was built: a friendship built on art and sharing and giving our best to each other.

I am really grateful to have met Sharon; in the past, we would have gone all our lives without knowing the other existed, living so far apart. In what way would we have ever met, much less intertwined our creativity? And yet here we are today, playing cards together. Thank you, Sharon, for this project and for being my friend.

If you want to see all the cards, and I mean all – I’ve set up a permanent page for them

Read Sharon’s account of her card-creating experience here at her blog.

22 thoughts on “Game of Cards”